Preliminary data on the diet of Chalcides chalcides (Squamata: Scincidae) from Northern Italy 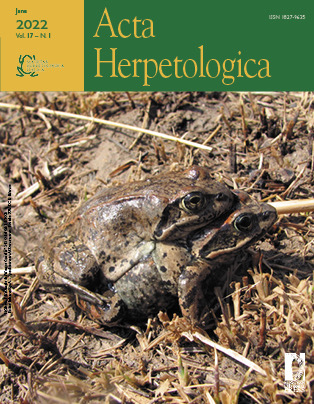 The diet in skinks is known mainly for extra-European species, especially from Australian ones, where these lizards are represented by a great number of species, while, in comparison, data for species from other continents are scarce. The three-toed skink, Chalcides chalcides, is found in a restricted part of northern Africa and in Italy, where it is distributed almost uniformly throughout the peninsula and on the major islands. Although it is well studied for aspects such as morphology and ecology, data concerning trophic preferences are scarce, and available only for the populations of south-central Italy. In this note we report preliminary data about the diet of an Apennine population of the three-toed skink, Chalcides chalcides, at the northern boundary of its distribution area. Faecal contents from 20 individuals were collected in June 2015, obtaining an overall sample of 48 prey items. Araneae constituted the most preyed taxon (over 40%), followed by Hemiptera (35,4%) and other prey taxa (Hymenoptera, Coleoptera, and Dermaptera) in much lower percentages. We found no differences between smaller/younger and larger/older individuals in consumed preys. As well as confirming the general trophic predilection of this skink for spiders, we also found some interesting differences in preyed items with studied populations of south-central Italy.