Genetic diversity and trait profiles of some Amaranthus genotypes 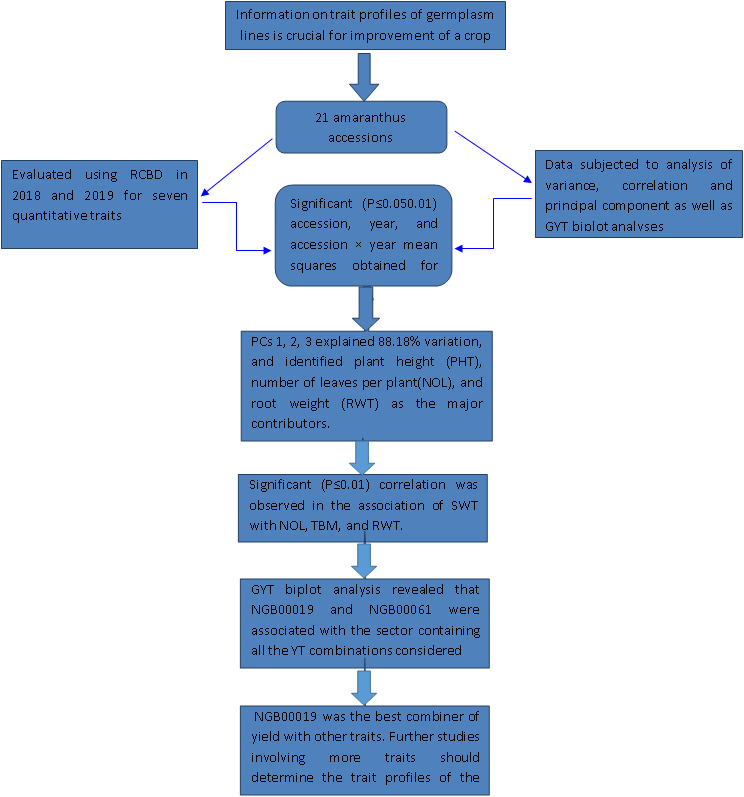 Knowledge of the pattern of trait variation among accessions, and the trait profiles of the accessions is crucial for improvement of a crop. Twenty-one Amaranthus accessions were evaluated in 2018 and 2019 to investigate the extent of genotypic diversity among the amaranth accessions and their trait profiles. Data were subjected to analysis of variance, and correlation and principal component analyses. Taking stem weight (SWT) as the yield, the accession × yield-trait combination (GYT) biplot was employed to investigate the trait profiles of the accessions. Accession, year, and accession × year mean squares were significant (P≤0.05/0.01) for most of the measured traits. The first three principal components explained 88.18% of observable variation among the accessions and identified plant height (PHT), number of leaves per plant (NOL), and root weight (RWT) as the major contributors. Significant (P≤0.01) correlation was observed in the association of SWT with NOL, TBM, and RWT. Accessions NGB00019 and NGB00061 were associated with the sector containing all the YT combinations considered. However, NGB00019 was identified as the best combiner of yield with other traits. Further studies involving more traits should determine the trait profiles of the remaining accessions.