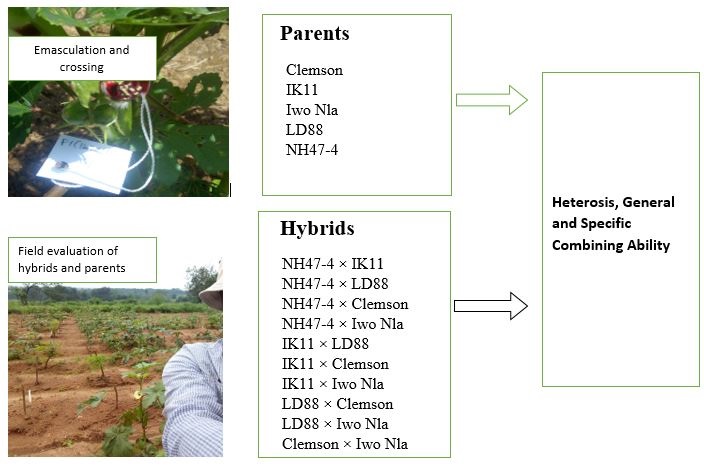 Information on gene action controlling quantitative traits is important for effective selection. A five-parent diallel cross, which generated 10 F1 hybrids of okra (Abelmoscus esculentus) were evaluated during the early and late planting seasons of 2019 in Ibadan, Nigeria. Data obtained were subjected to diallel analysis and genotype by yield-trait (GYT) biplot analysis to estimate combining ability effects and identify stable hybrids for measured traits respectively. Genotype mean squares were significant (p≤0.01) for all most measured traits. Furthermore, General Combining Ability (GCA) and Specific Combining Ability (SCA) mean squares were significant (p≤0.05/0.01) for most measured traits, indicating the influence of additive and non-additive gene actions in expression of these traits. Preponderance of non-additive gene effects shows the high influence of the environment on most of the considered traits in this study. Iwo Nla had the most desirable GCA estimates of -0.98 and 1.14, for days to 50% flowering (DTF), number of fruits per plant (NoF) respectively while IK11 had the most desirable GCA values for mature-fruit width (0.21) and 1000-seed weight (5.71). SCA estimates were most desirable for NH47-4 × LD88, NH47-4 × Iwo Nla, with values of -4.21 and 4.32 for DTF and NoF respectively. Hybrids NH47-4 × Iwo Nla and IK11 × Clemson associated with higher NoF x trait might be useful for improvement of number of fruits per plant in this population.