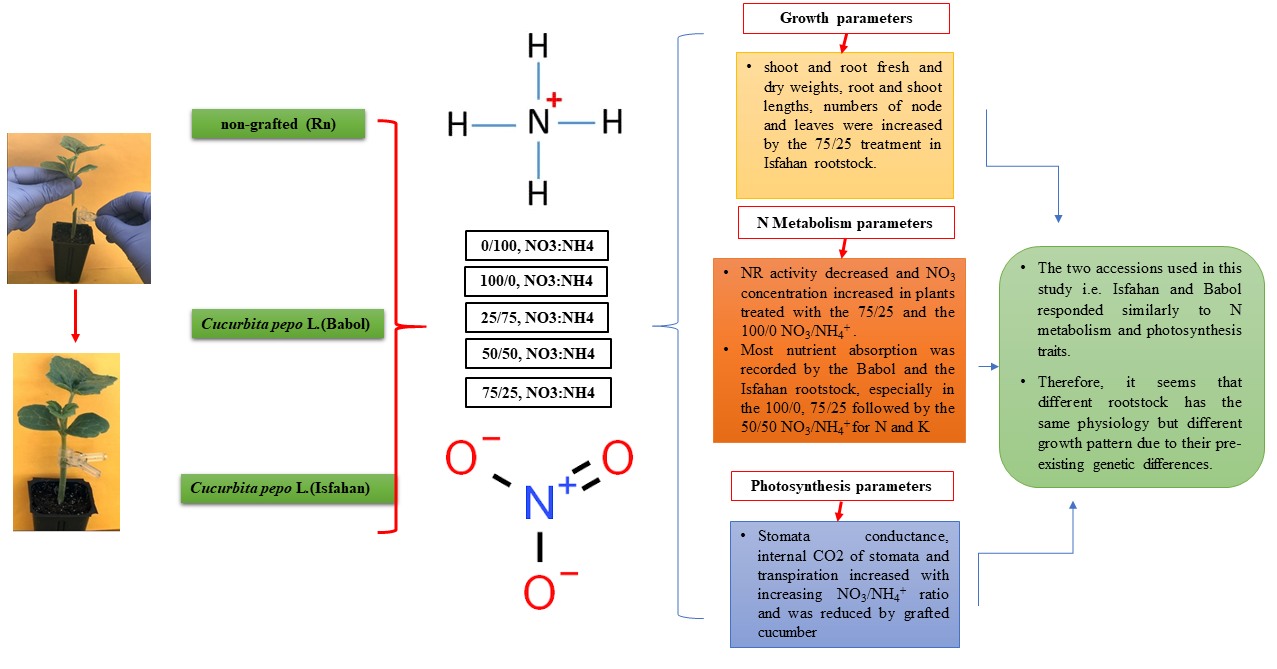 The use of an endemic plant as rootstock has many merits but its application for cucurbits production has not been extensively investigated. The present study determined the growth responses of grafted cucumber using two endemic rootstocks from Cucurbita pepo L. fertilized with different ratios of nitrate (NO3-): ammonium (NH4+) fertilizer. A greenhouse study was carried out using cucumber (C. sativus ‘Dominos’) grafted on two accessions of Cucurbita pepo L. collected from Babol and Isfahan with the control being ungrafted C. sativus ‘Dominos’. Different ratios of NO3-/NH4+ as follows: 100:0 (NO3− alone), 25/75, 50/50, 75/25 and 0/100 (NH4+ alone) were applied. It was found that different rootstock has the same physiology but different growth attributes. The growth of the ungrafted cucumber was lower than the grafted ones, and Babol showed better or equal growth compared to the Isfahan rootstock. The NO3-/NH4+ effect on growth of the cucumber shoot and root fresh and dry weights, root and shoot lengths, nodes, and number of leaves were increased in the 75/25 ratio compared to the other treatments. Grafting on the Isfahan and Babol showed the same effect of N metabolism i.e., grafting increased nitrate reductase activity and NO3- concentration in the 75/25 and the 100/0. Protein content and amino acids content of leaves increased in the grafted cucumber treated with 50/50 NO3-/NH4+. The same response of photosynthesis parameters was observed in the different rootstocks. In conclusion, the result suggested that the grafted ‘Dominos’ on Babol endemic rootstock at 50/50 NO3-/NH4+ ratio gave the high growth.