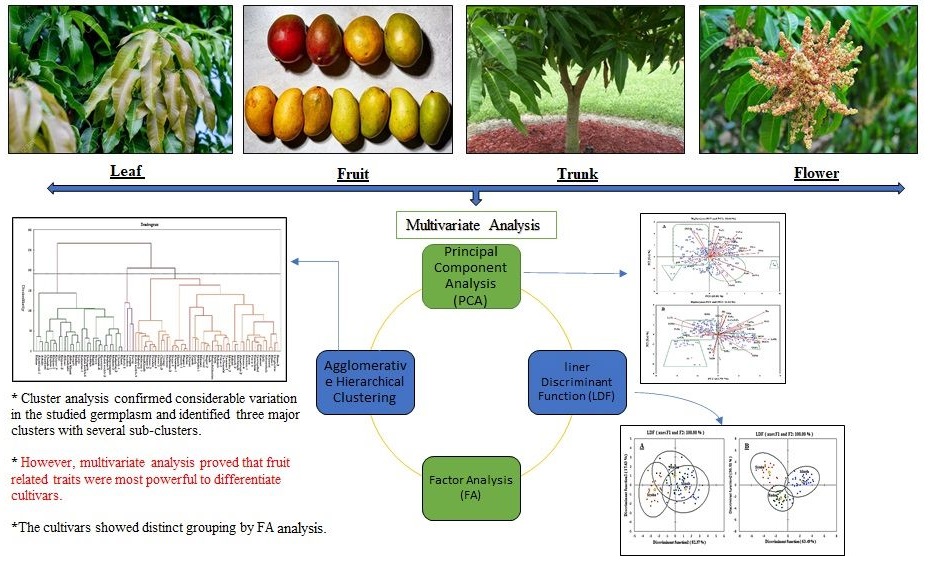 This study was conducted at southern Iran with the aim to evaluate the phenotypic diversity of 84 mango cultivars by using morphological and biochemical traits. Two other industrial cultivars ‘Longra’ and ‘Senderi’ used as control of the study. Descriptive results indicated that the value of both quantitative and qualitative variables all the cultivars were lower than the ‘Senderi’. The variability among cultivars was highly signiﬁcant in the measured traits. The fruit weight, fruit length, stone weight, stone length, fruit beak, dry matter, and petiole length showed highly discriminating power. Pearson’s correlation analysis revealed high variability due to the existence of signiﬁcant positive and negative correlations among traits. Agglomerative hierarchical clustering conﬁrmed remarkable variation in the studied germplasm and identiﬁed three major clusters with several sub­clusters. The 80.20, 70.11, and 100% of the quantitative variability was explained by principal component analysis (PCA), factor analysis (FA), and liner discriminant function (LDF) where fruit descriptors contributed most of the total variation, respectively. However, multivariate analysis proved that fruit related characters were most powerful to diﬀerentiate cultivars. The cultivars displayed distinct grouping by FA and LDF compared to PCA. The results revealed that the Iranian mango germplasm has a high potential for speciﬁc breeding project regarding fruit size and quality that should be further completed by a molecular marker analysis.