Think different? Populist attitudes and their consequences on vote behaviour in the 2016 and 2020 italian constitutional referenda 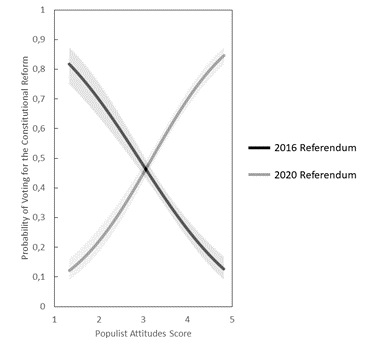 Following the rise of populist parties and leaders in the last decade, research has extensively investigated the political and economic factors that have driven some voters towards populism. Less research has been devoted to the individual psychological factors associated with populist attitudes, and to how those can influence political decisions, such as vote choice in an election or referendum. In this study, we analysed data from the 2016 and 2020 ITANES panel surveys, where populist attitudes were measured by a 6-item scale. Findings indicate that populist attitudes were associated with relevant psychosocial factors, such as nationalism, political efficacy, and conspiracist beliefs. Populist attitudes in turn explained part of the variance in vote choice at both referenda, after controlling for the evaluation of the reform and political orientation. Furthermore, we found that voters with strong populist attitudes were more likely to engage in motivated reasoning in the form of the biased evaluation of the foreseeability of the referendum results, making simplified and self-reassuring evaluations aligned with their vote choice. The discussion focuses on how populism as a political phenomenon can be rooted in relevant individual differences in the psychological features of voters.