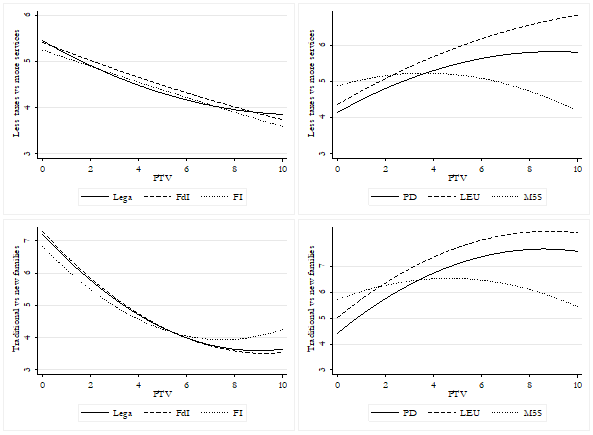 The transformation of politics in contemporary democracies has led to the emergence of a new ideological conflict, alongside the traditional left-right scheme, described as liberal–authoritarian or cosmopolitan–nationalist cleavage (Kriesi et al. 2008; Hooghe and Marks 2002). This change brought to a redefinition of the linkages between issue and voting preferences, as many voters decide to support a party regardless of their positions on issues while voting for the same party. Within such framework, the contribute of the new generations to the growth of the electoral dealignment and volatility has been largely analysed (Miller et al. 1996; Franklin 2004; Plutzer 2002). Issue incongruency is part of the process. Young people are often considered to be tolerant and inclusive because they grew up under prosperous and secure conditions and developed post-materialist values of freedom, multiculturalism, progressivism (Inglehart and Welzel 2005; Janmaat and Keating 2019). However, the perspective of left-cosmopolitans engaged in electoral politics contrasts with the image of economically-insecure left-behind group of young people who don’t share the same progressive values (Bartle et al. 2020; Sloam and Henn 2019) and support right-wing political parties. What is still unknown is the extent to which extreme ideological traits and attitudes (e.g. negative discourses on immigration) combine with positions of openness on individual freedom. Likewise, the same contradiction can be found among left-wing voters who assume liberal position on economy or those economically left and culturally conservative. The article aims at analysing the relationship between issue positions and vote (propensity to vote). We test the hypotheses of a coherent vs incoherent ideological space by looking at the structure of voters’ preferences on economic (State vs. free market) as well as cultural issues (individual rights, attitudes towards minorities, European integration) and the differences between young people and older component of the electorate. The analysis is focused on the Italian case. Data are taken from the 2020 Itanes survey.