Two is Better than One? Testing a Deductive MARPOR-based Left-Right Index on Western Europe (1999-2019) 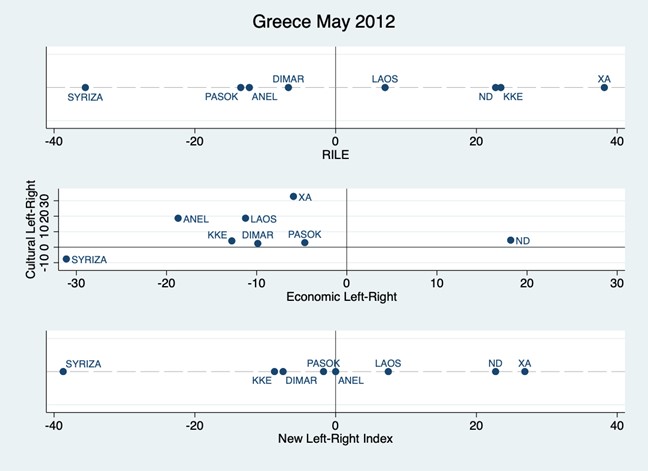 Most of the existing indexes measuring parties’ left-right positions through Manifesto Project (MARPOR) data, including the ‘RILE’, share a partially or fully inductive nature and an underlying assumption of left-right unidimensionality. However, as the structure of party competition in contemporary Western Europe has been recently moving away from traditional ‘left-libertarian/right-authoritarian’ patterns, the inductive and unidimensional characteristics of such instruments may hinder the quality of their measurements. In this article, I introduce and develop a new left-right instrument, which is wholly deductive and relies on an explicit linkage with theoretical sources in the conceptualisation of economic and cultural left and right as the basis for the subsequent index operationalisation through the justified selection of MARPOR items. After deriving the individual deductive economic and cultural left-right scores and employing them in the mathematical formalisation of a synthetic left-right measure to be compared with existing unidimensional instruments, I perform a comparison between the new left-right index and the RILE. Both instruments are empirically tested on a dataset made covering the 20-year period between 1999 and 2019 in 16 Western European countries, for a total of 72 elections and 474 party-election combinations. More specifically, the statistical probes take the form of rank correlation analyses between the election-specific left-right rankings of each index and those provided by the external benchmark of the “Chapel Hill Expert Survey” (CHES). Results are mixed and indicate that, whilst more traditional patterns of competition seem to still apply across the board in pre-Great-Recession years, the new left-right index is a more valid measure of parties’ left-right positions both in the ‘turbulent times’ of the 2010s and in the vast majority of the areas across the region. This is especially true in Southern Europe, for which the RILE is known to be particularly problematic. Hence, this work calls for further discussion on the different patterns of Western European party competition across space and time, as well as differentiated and context-specific deductive left-right measurement.