Price dependence of biofuels and agricultural products on selected examples 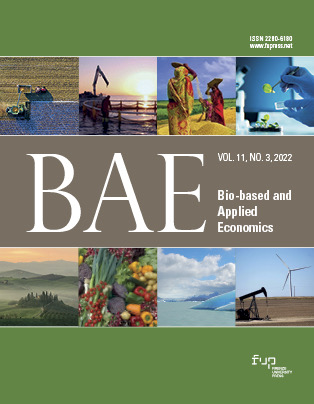 The growing demand for raw materials for the production of biofuels may lead to an increase in the prices of these raw materials and, due to the shortage of land, to an increase in the prices of other crops. This is due to the fact that the growing demand for raw materials for the production of methyl esters and bioethanol (the most widely used biofuels), such as rape and corn, is a form of competition on the food and feed markets. It should be mentioned that although the topic is not new, it is still very relevant, taking into account the expansion of energy crops, as well as national, European and world energy policy. Especially due to the fact that, as has already been mentioned, the use of plant products for the production of biofuels has an impact on the regulations of the food market.This study is to analyze the volatility and dependence of ethanol, biodiesel, maize and rapeseed prices in the period of 2016-2019 and aims at assessing the correlation between the agricultural and biofuel markets. In this paper, the investigation regarding co-integration of biofuel and agricultural commodity prices has utilized ethanol and commodity prices with the use of the vector error correction model (VECM). Price dependencies between the prices of biodiesel, rapeseed, maize and ethanol were found, indicating the existence of long-term causality in at least one direction between the analyzed prices. The results indicated that biodiesel prices during the period in question were influenced by the previous week’s prices of biofuel and rapeseed. Moreover, biodiesel prices had an impact on the level of ethanol and rapeseed prices. In the case of rapeseed, the correlation between its prices and those of corn is also noticeable, while prices of corn may also affect prices of ethanol.