Vote metropolitanization after the transnational cleavage and the suburbanization of radical right populism: the cases of London and Rome 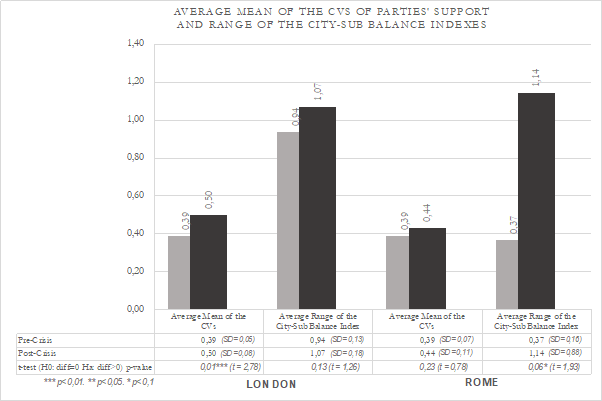 Voters’ division into opposing territorial blocs seems to be a noticeable feature of current European electoral politics, as mainstream traditional-left parties remain entrenched in the ‘centers’ and challenger parties of the populist Right surge in the ‘peripheries’. This electoral dynamic appears to affect especially the metropolitan areas, where inner districts represent the bastions of cosmopolitanism, while the outer ones the realm of ethnonationalism. In this regard, some authors argue that advanced societies are affected by a ‘metropolitanization of politics’ process. Against this backdrop, the present contribution advances the thesis that the emergence of the ‘transnational cleavage’ and its strengthening during the ‘long post-Recession decade’ (2008-2019) gave a boost to the electoral metropolitanization process. This thesis is tested on two case studies: London and Rome, the capitals of two countries where populist radical right forces proliferated in the 2010s and apparently widened the division between centers and suburbs. First, I investigate whether there has really been a pattern of metropolitanization of the vote in London and Rome. Second, relying on the data collected by the British Election Study (BES) and the Italian National Election Studies (ITANES), I verify whether the presumed electoral polarization corresponds to the concentration of GAL (green/alternative/libertarian) values in inner districts and TAN (tradition/authority/national) values in the suburbs. Findings help to discern not only if the metropolitanization of politics thesis holds in the UK and in Italy, but also if the transnational cleavage has a rooted territorial dimension.