Welcome to the new QOE-IJES issue!!

Get fresh research insights and innovative findings in the 1/2022 issue!

The first article, by Mirko Crulli, is “Vote metropolitanization after the transnational cleavage and the suburbanization of radical right populism: the cases of London and Rome”. It is focused on voters’ division into opposing territorial blocs. This is a noticeable feature of current European politics, as traditional-left parties remain entrenched in the ‘centers’ and parties of the populist Right surge in the ‘peripheries’. This electoral dynamic is also affecting metropolitan areas, where inner districts represent the bastions of cosmopolitanism, while the outer ones the realm of ethnonationalism. The article advances the thesis that the emergence of the ‘transnational cleavage’ and its strengthening during the ‘long crises-decade’ (2008-2019) gave a boost to the electoral metropolitanization process. This thesis is tested on two case studies: London and Rome. Findings help to discern not only if the metropolitanization of politics thesis holds in the UK and in Italy, but also if the transnational cleavage has a rooted territorial dimension.

The second article is “Euroscepticism and populism in Italy among party elites and the public”, by Nicolò Conti, Danilo Di Mauro and Vincenzo Memoli and focus on two phenomena (populism and Euroscepticism) that characterize recent political scenario. While some recent analyses discuss the possible convergence between the two, conceptually and historically, Euroscepticism and populism are two distinct ideological realms. Through an analysis of the attitudes of political elites and the public, the authors argue that the two phenomena, in the Italian case, actually move in parallel and in general do not converge.

Fulvio Venturino stresses the leader selection dynamics, moving from the Italian case. His article, ‘Leader selection in Italian parties. Intraparty democracy in weak organizations, 1946–2020’, is an analysis of the methods Italian parties used to select their leaders from 1946 to 2020. The article shows that both candidacy requirements and selectorates have become more inclusive through time; that the diffusion of inclusive – and cumbersome – selectorates has been followed by the adoption of alternative faster methods of selection based on some type of party council to be used under pressure; and that there is a large overlapping between formal and actual selectorates.

The last article is ‘Mirror, mirror on the wall, who is the most populist of them all? A comparison of League and Five Star Movement voters’, written by Gianluca Piccolino, Andrea Scavo and Pierangelo Isernia. The article investigates the voting determinants for partners of the first populist government in Western Europe, the first Conte cabinet and explores how populism affects voting choices for two parties supported the mentioned Conte government (Lega and Five Star movement), looking at the interconnections between the thin-centred populist ideology, other host ideologies, and policy preferences. They show the importance of populism as a predictor of voting choices for these two parties, as well as marked ideological differences between the two electorates. Moreover, support for the main policies of the government has been mixed, a symptom of the poor cohesion between these two parties. 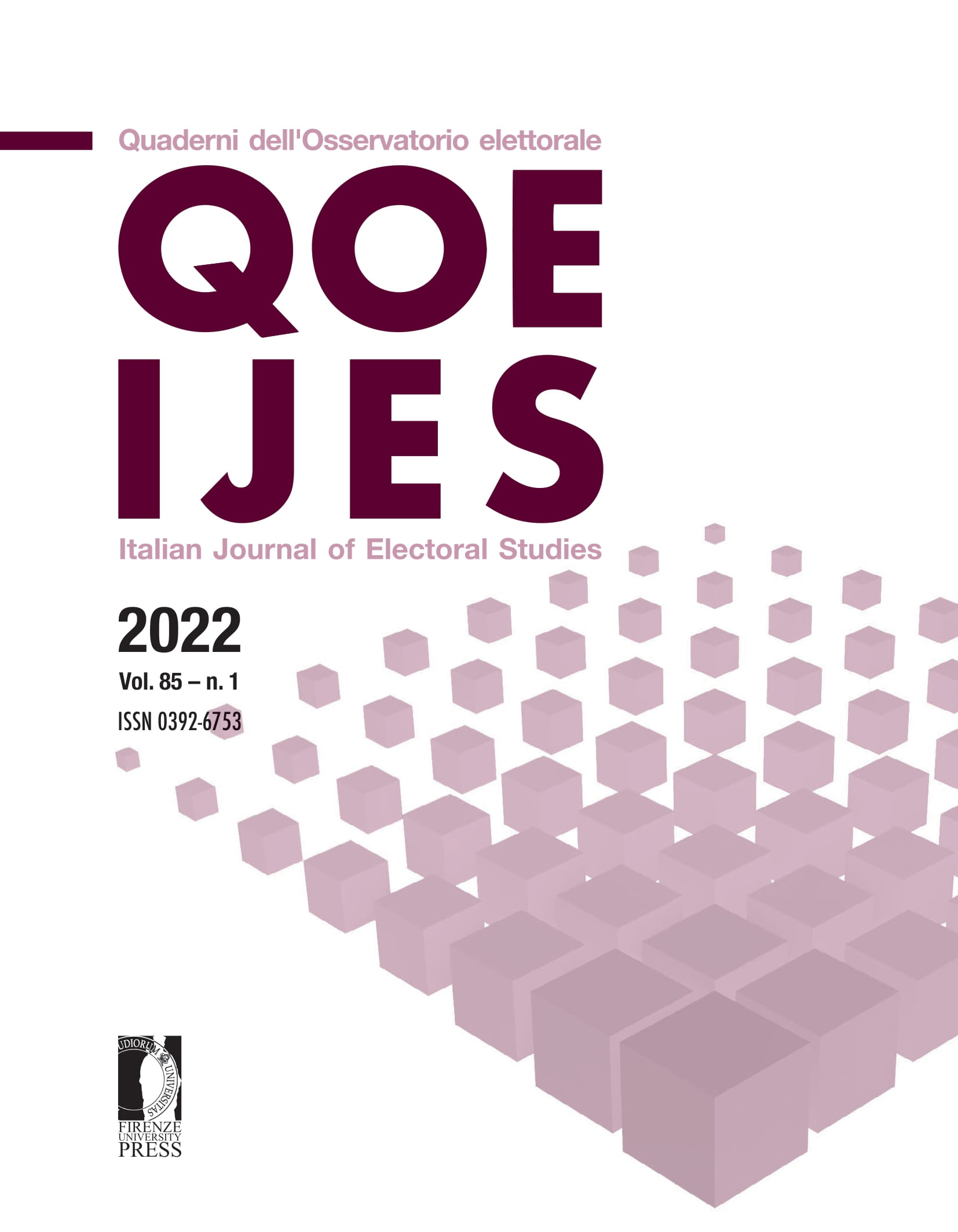 Vote metropolitanization after the transnational cleavage and the suburbanization of radical right populism: the cases of London and Rome
Mirko Crulli
3-23
PDF
Euroscepticism and populism in Italy among party elites and the public
Nicolò Conti, Danilo Di Mauro, Vincenzo Memoli
25-43
PDF
Leader selection in Italian parties. Intraparty democracy in weak organisations, 1946–2020
Fulvio Venturino
45-61
PDF
Mirror, mirror on the wall, who is the most populist of them all? A comparison of League and Five Star Movement voters
Gianluca Piccolino, Andrea Scavo, Pierangelo Isernia
63-75
PDF
View All Issues