TECHNE 22 (2021): Circular Transition and Design
Introduction to the issue

Circular transition: scenarios for the future of design 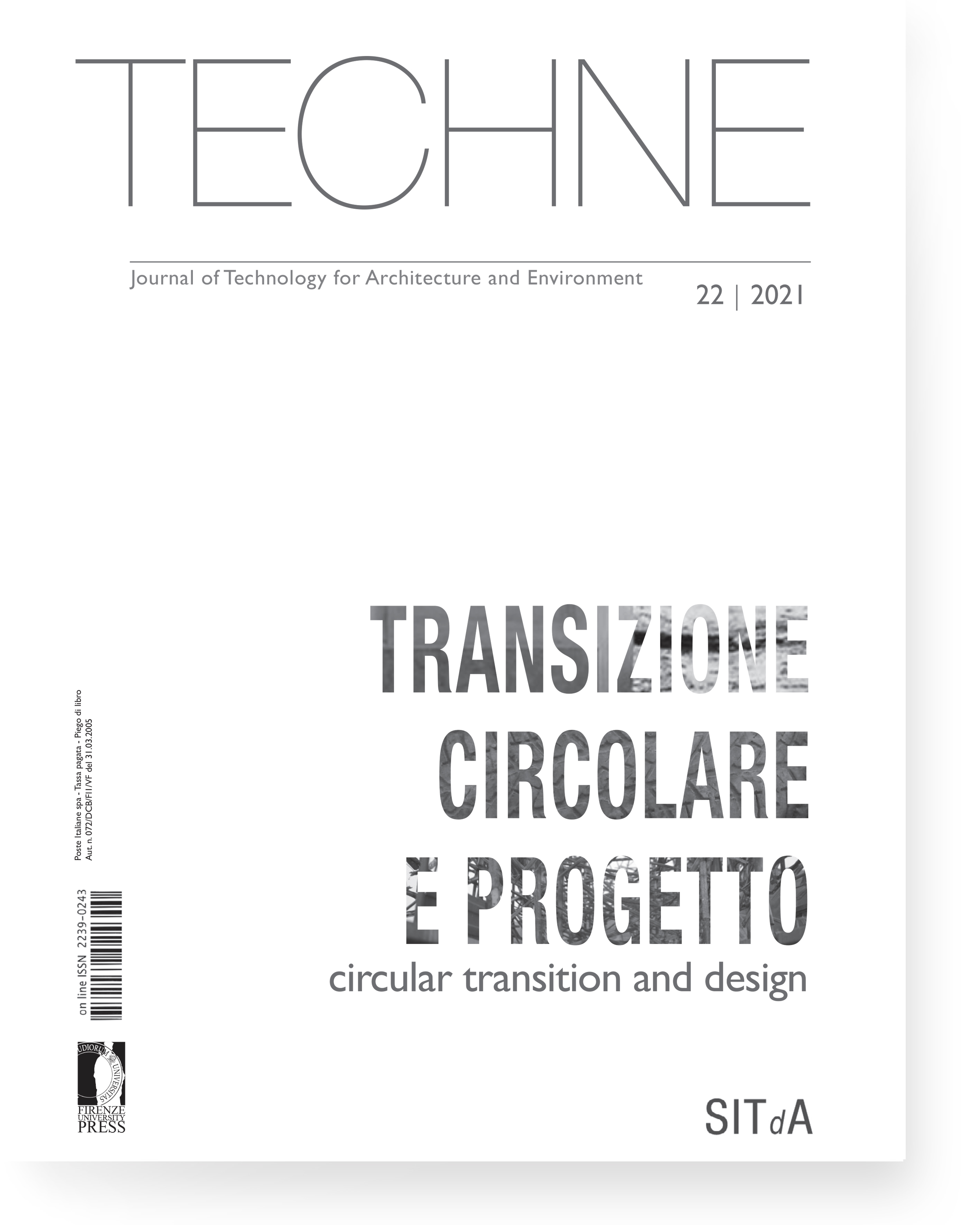 The 22nd issue of TECHNE, which deals with the theme of circular transition and design, stems from the planning and scientific-cultural orientations developed with the Direction and Editorial Board for the period 2017-2021.  The conviction that the processes of transferring decisions and knowledge must be accepted and developed along appropriate lines of continuity, is envisaged with the new Board and the new Direction of the journal, in the awareness of the value that it represents for the scientific community of SITdA. Promoting knowledge that supports applied research and technology transfer is the basic reference for the editorial direction also at the start of the 2021-2023 three-year period. TECHNE journal is now an important part of the Society’s common heritage and is increasingly recognized for its ranking and the contents expressed in a significant “critical area” such as the relationship between knowledge, design, technology and the environment in architecture.

In recent years, the journal has thus acquired a significant accreditation thanks to the work carried out, since the year of its foundation in 2011, by figures who have succeeded each other in the different roles (Paolo Felli, Roberto Palumbo and Maria Teresa Lucarelli are to be mentioned for their commitment in the Direction, as well as Chiara Torricelli and Emilio Faroldi for their work as Editor in Chief) and thanks to the active participation of the Editorial Boards, organisms and members of SITdA, as with the contributions of experts and stakeholders who have published in the journal.

The topic of this issue, entitled “Circular Transition and Design”, is an emerging theme in the field of technical policy and international and national research, which is treated according to articulated guidelines and forms of scientific debate. Correlating the concepts of circular transition and design is part of a choice of field that is now based on continuity and development of the elaboration of themes that have been clearly announced since the 1970s. From that period a path of sensitivity and knowledge was born, which can be started with “the limits of development” (Meadows et al., 1972), with “the circle to be closed” (Commoner, 1972) and with the need to evolve “beyond growth” (Daly, 1996), until we consciously tend towards climax-type conditions, characterized by the minimization of energy and matter flows in the metabolism of ecosystems (Rifkin, 1983).

The conceptual and scientific elaboration of the years in which ecological thinking grew, saw its progressive transfer to the field of architecture, through the central role played by the technological area in its recognition as a science of transformation processes and interactions among the natural and anthropic environment. In the wake of the crises that have occurred over the last few decades, the concept of transition has been developed in the scientific field based on the evidence of the growing degradation of the environment as a living space for communities. From the climate crisis to the socio-economic crisis and up to the latest pandemic crisis, the impacts of processes fuelled by the effects of the Anthropocene era (Crutzen, 2005) require a radical revision of dissipative development models, which consider growth as a factor of constant amplification of productivity in the different fields of human activity, without considering the value of nature and the services it provides.

In the era of the “Great Acceleration”, we are observing the significant transformation of the relationship between the human species and the biosphere: human beings have become bio-geological agents that modify the physical and metabolic processes of the planet, mainly affecting urban areas where, between 1945 and 2015, the settled population increased from 700 million to almost 4 billion (McNeill and Engelke, 2018). The progressive mismatch between technological and biological cycles identifies a trend that is no longer sustainable as turbulent economic growth constantly conflicts with the natural limits of the planet. The metabolism of our societies is carried out by exploiting the stocks and flows of matter and energy from natural systems, which however have limited regenerative and receptive capacities (Bologna and Giovannini, 2017). Human action for continuous and unlimited growth has thus transformed the circular processes, characteristic of the workings of natural systems, into linear processes at the end of which waste and non-reusable waste are produced.  To overcome this model of production and consumption it is necessary to make processes circular again, in which the extraction of resources is reduced by keeping them in a cycle of use for as long as possible (Ronchi, 2021).

This challenge must be approached by relocating the whole of humanity within the natural system on which it is dependent and to which it is strongly connected. Thus, development without quantitative growth tends to be implemented within the biophysical limits of natural systems. It is necessary to equip ourselves against the phenomena of large population growth and the enormous withdrawal and consumption of resources by organizing circular development models that minimize waste, make efficient use of resources and drastically reduce the loss of natural capital, the loss of biodiversity, pollution, inequalities and socio-economic crises, to name but a few of the most important problems of our time.

The transition can therefore only be circular, capable of ensuring a safe and fair space for mankind, and therefore it can only be ecological, since only the correspondence – in terms of “weights” and times – between transformation processes and the carrying capacity of the ecosystem will allow the ecologically sustainable development. The idea of a circular transition sees products designed and manufactured to facilitate recycling, reuse, repair, disassembly and reconstruction, where objects are used for greater efficiency, as in the case of leasing and sharing, by increasing the transit time of products and artefacts in environmental systems and habitats. So, it is not a question of reallocating known aspects under umbrella concepts, but of implementing a profound cultural, scientific, productive and relational reconversion through a paradigm shift that places options and, above all, values in a different position, inducing new ones and determining ecosystem implications not previously practised.

A major challenge will be played out in terms of the many transitions that accompany the mainstream of the ecological one, starting with the economic transition but also the administrative, infrastructural, urban, building and energy transitions. An increasing number of countries are coping with the disruptive effects of global warming and climate change by intensifying decarbonizationthrough the transition from fossil to renewable energy sources. This pathway can be implemented through technological innovations of greater efficiency and the reduction of energy needs, fuelling the transition to greater electricity use and stimulating research into the use of scarce resources (Sassoon, 2019, p.9). Promoting the transition to regenerative cities requires, on the one hand, the development of circular metabolisms and processes gradually replacing conventional and linear ones, and on the other hand, the proposal of low-carbon technical policies and actions, support for social innovation, as well as urban organization in eco-districts where efficient and low-waste products and processes in the field of energy and materials are integrated.

The management of complexity is the qualifying point through which it is necessary to increase the operational synergies between research, the professional world and local authorities. The transfer of knowledge and the acquisition of skills, as well as the relationship between generalist knowledge and the specializationof knowledge, is part of the delicate relationship between research, experimentation and innovation. The qualification of architectural design concerning the advanced principles of circular transition requires the management of integrated knowledge systems, expanding its approach in terms of pluralism, the interaction between disciplinary specializations, recognition of contributions avoiding cultural hegemonies or instrumental subalternity. If specialization becomes necessary, it requires «less and less abstraction and more focus on objectives on which the contributions of multiple and integrated skills converge. The horizons of knowledge and design must be measured against multidisciplinary collaboration and not so much against a transdisciplinarity that poses problems of scientific identity» (Torricelli, 2014).

Within this scenario, the relationship between ecology and society must also take into account the relationship between the bio-economy and the organization of the territory, landscape and environment, in the same way as the interdependencies between the anthropic system and the natural system. The future of the project, in its necessary conditions of heteronomy, can only be human and environment centered, according to a broad systemic understanding and an adaptation to natural limits without pushing beyond the environmental capacities of resource regeneration and waste absorption (Bologna and Giovannini 2017).